There are two basic winding arrangements for the electromagnetic coils in a two phase stepper motor: bipolar and unipolar.This artical is discussing Unipolar Vs Bipolar Stepper Motor.

Unipolar and Bipolar Half Coil, because we're using less turns, doesn't give us great low speed torque, but because of the low inductance, holds the torque out to high speeds.

Bipolar Series uses the full coil so it gives very good low speed torque. But because of the high inductance, the torque drops off rapidly. 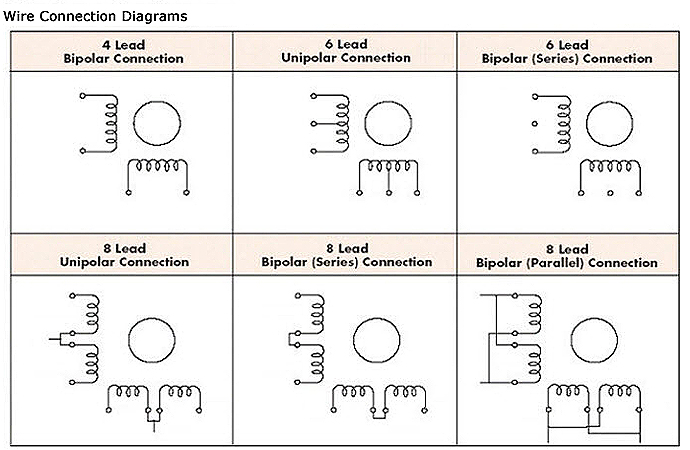 A unipolar stepper motor has two windings per phase, one for each direction of magnetic field. Since in this arrangement a magnetic pole can be reversed without switching the direction of current, the commutation circuit can be made very simple (eg. a single transistor) for each winding. Typically, given a phase, one end of each winding is made common: giving three leads per phase and six leads for a typical two phase motor. Often, these two phase commons are internally joined, so the motor has only five leads.

A microcontroller or stepper motor controller can be used to activate the drive transistors in the right order, and this ease of operation makes unipolar motors popular with hobbyists; they are probably the cheapest way to get precise angular movements.

(For the experimenter, one way to distinguish common wire from a coil-end wire is by measuring the resistance. Resistance between common wire and coil-end wire is always half of what it is between coil-end and coil-end wires. This is due to the fact that there is actually twice the length of coil between the ends and only half from center (common wire) to the end.) A quick way to determine if the stepper motor is working is to short circuit every two pairs and try turning the shaft, whenever a higher than normal resistance is felt, it indicates that the circuit to the particular winding is closed and that the phase is working.

Bipolar motors have a single winding per phase. The current in a winding needs to be reversed in order to reverse a magnetic pole, so the driving circuit must be more complicated, typically with an H-bridge arrangement (however there are several off the shelf driver chips available to make this a simple affair). There are two leads per phase, none are common.

Because windings are better utilized, they are more powerful than a unipolar motor of the same weight. This is due to the physical space occupied by the windings. A unipolar motor has twice the amount of wire in the same space, but only half used at any point in time, hence is 50% efficient (or approximately 70% of the torque output available). Though bipolar is more complicated to drive, the abundance of driver chip means this is much less difficult to achieve. An 8-lead stepper is wound like a unipolar stepper, but the leads are not joined to common internally to the motor. This kind of motor can be wired in several configurations.