This is a artical talking about the Stepper Motor Speed and Torque Relationship, after read this topic, your will be more familiar with the stepper motor.

What is Torque for a Stepper Motor?

When you're looking for a stepper motor, you'll often see statistics related to torque. Torque information isn't the only thing you'll be looking at when it comes to selecting your motor, but it is important. Generally, you'll be looking at information regarding how much torque the stepper produces under certain conditions. Before you start examining the different types of torque and the relationship of torque to stepper motor speed, it's important to understand exactly what torque is.

Simply put, torque is rotational force; that is, it's the force used to turn things. This force is measured in pound-feet in the English system, but the international standard is Newton-Meters (or in the case of a small stepper motor, milliNewton Meters (mNm)), meaning the amount of force applied in Newtons times the distance to the center of the rotating object in meters. 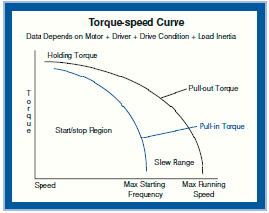 Holding Torque -amount of torque that the motor produces when it has rated current flowing through the windings but the motor is at rest.

Detent Torque -amount of torque that the motor produces when it is not energized. No current is flowing through the windings.

Pull-in Torque Curve -Shows the maximum value of torque at given speeds that the motor can start, stop or reverse in synchronism with the input pulses. The motor cannot start at a speed that is beyond this curve. It also cannot instantly reverse or stop with any accuracy at a point beyond this curve.

Stop / Start Region -area on and underneath the pull-in curve. For any load value in this region, the motor can start, stop, or reverse "instantly" (no ramping required) at the corresponding speed value.

Pull-out Torque Curve -Shows the maximum value of torque at given speeds that the motor can generate while running in synchronism. If the motor is run outside of this curve, it will stall.

Slew Range -the area between the pull-in and the pull-out curves, where to maintain synchronism, the motor speed must be ramped (adjusted gradually).

Inductance reduces a stepper motor's high speed torque performance. Inductance is the reason all motors eventually lose torque at higher speeds. Each stepper motor winding has a certain value of inductance and resistance.

At low speeds, high inductance is not a problem. Current can easily flow into the motor windings fast enough that the stepper motor has rated torque. At high speeds, however, sufficient current cannot get into the winding fast enough before the current is switched to the next phase, thereby reducing motor torque. Increasing the driver voltage can fight this loss of torque at higher speeds by forcing current into the windings of the motor at an increased rate. In summary, the current and the number of coil turns in the windings determine a motor's maximum torque output, while the voltage applied to the motor and the inductance of its windings will affect the speed at which a given amount of torque can be generated.